Harmony: An Interdisciplinary Approach to Integrating Art Historical Research and the Practices of Chinese Calligraphy and Seal Engraving 1 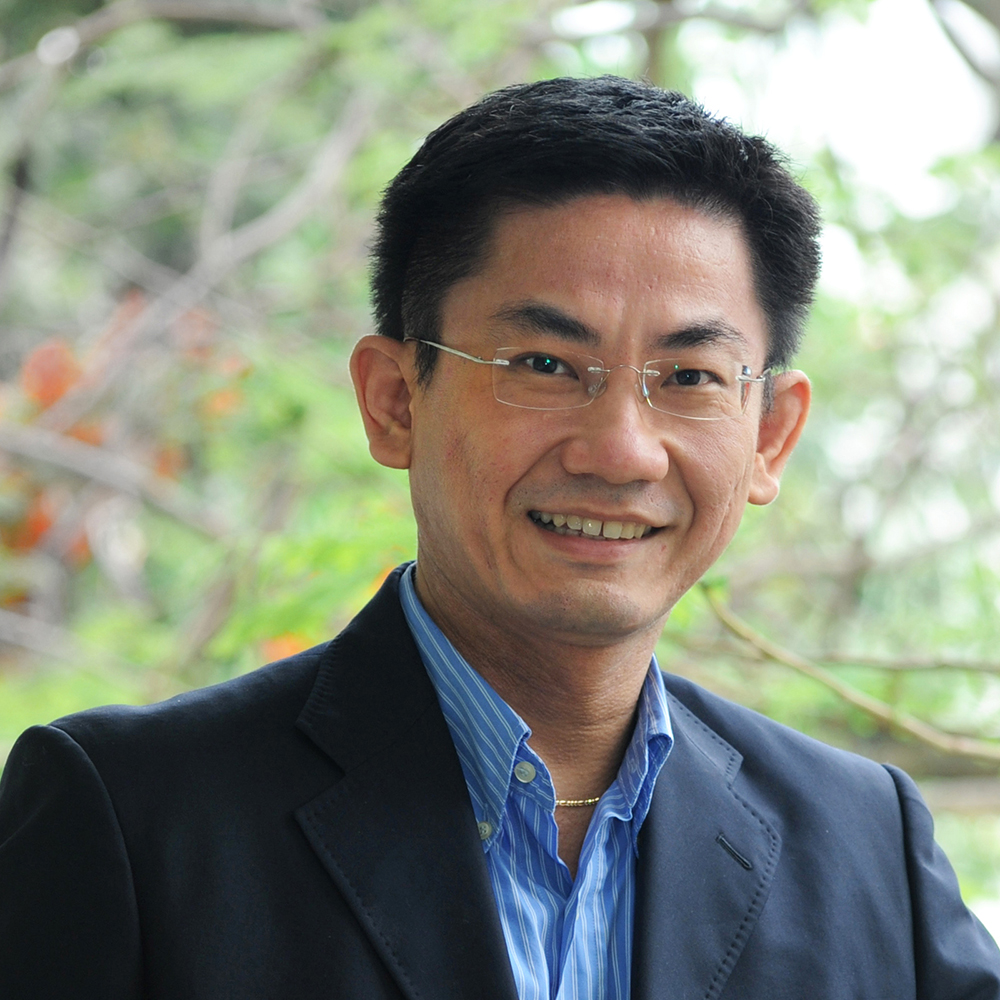 In the long history of Chinese culture, the concept and philosophy of harmony have always been dominating the leading values of society through time and space. As a response to this, my previous book publication entitled "Harmony: Synergy between Tradition and the Contemporary," endeavors to interpret the concept of "harmony" through an art historical research on the Chinese aesthetics of "equilibrium and Harmony" and "void-solid reciprocity," related theories on Chinese calligraphy and seal engraving, and my own creative works of Chinese calligraphy and seal engraving.

My unique artistic approach is characterized by its integration of the past and the present. Based on my study of a wide spectrum of traditional skills in brush and ink, my works are characterized by the utilization of unconventional materials, techniques and visual elements of multiple media in visual arts (Fig. 1 & 2), and the incorporation of contemporary thoughts. The works in this project are grouped into four categories to investigate four kinds of relationship:"Heaven and Man, "Give and Receive", "Black and White" and "Elegance and Vulgarity," which can be briefly introduced by the following excerpts: 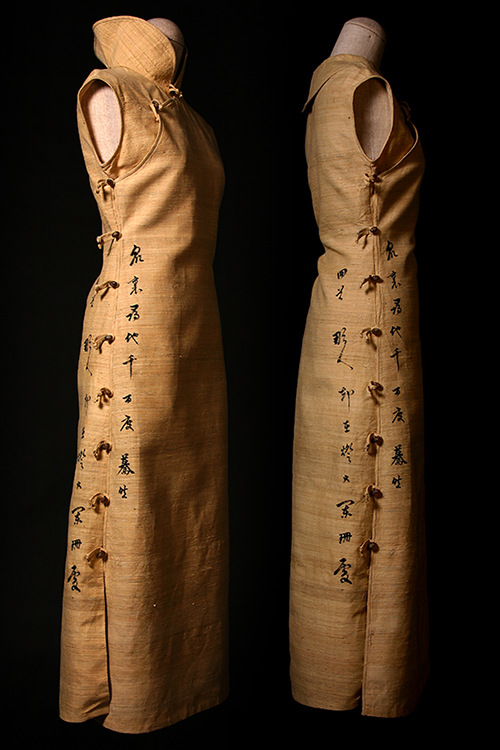 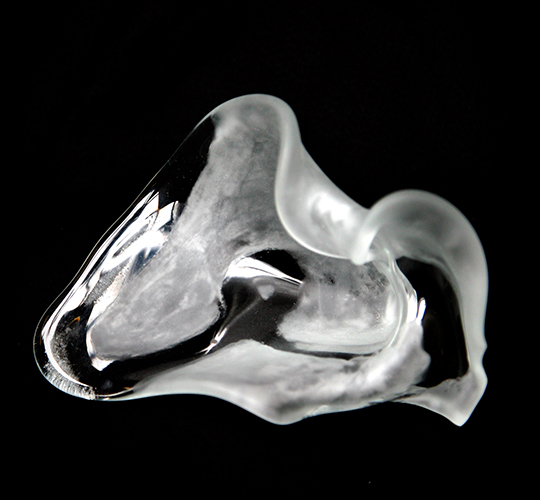 Heaven and Man
There is love between heaven and earth. The resources and blessings from Mother Nature are no doubt free gifts, yet the response from human varies: sometimes awestruck by the wonders of nature, sometimes enlightened, yet sometimes damaging. For instance, revealing the artist’s incisive admiration of the natural object, the jerky brushstrokes on Awestruck (Fig. 3) reinforce the coarse texture of a piece of weathered teak wood and the momentum generated from its twisting form. By contrast, Walking in the Mystifying Haze (Fig. 4 & 5), Louis Vuitton & Porsche (Fig. 6), and Service for Renminbi present the lamentation on the distorted relationship between man and nature such as environmental pollution and man’s endless desires for materialism, fame and profit. 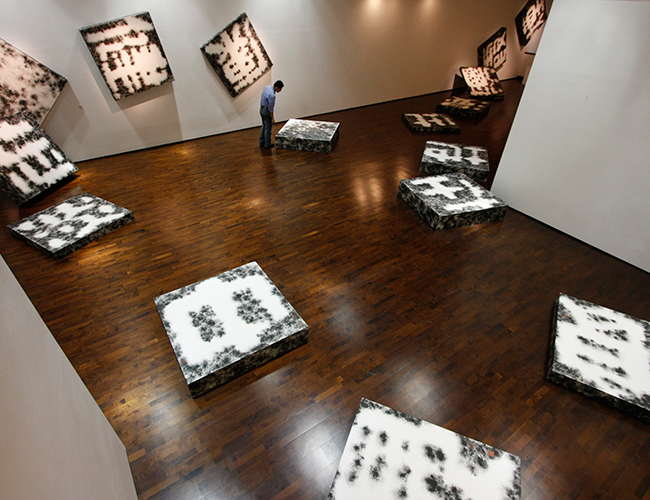 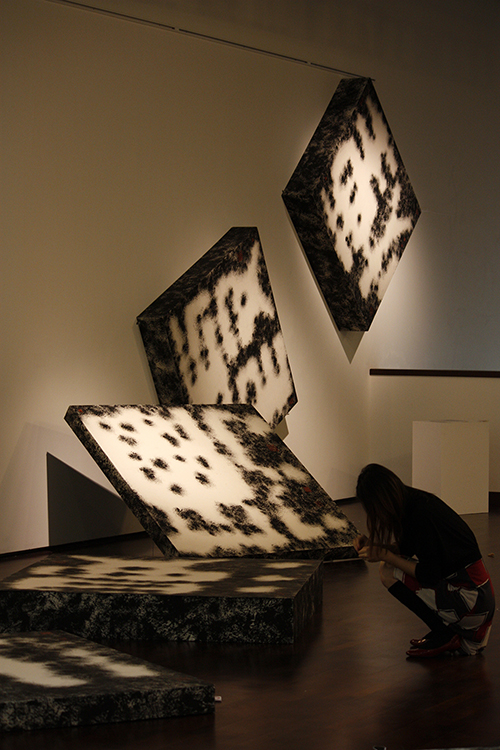 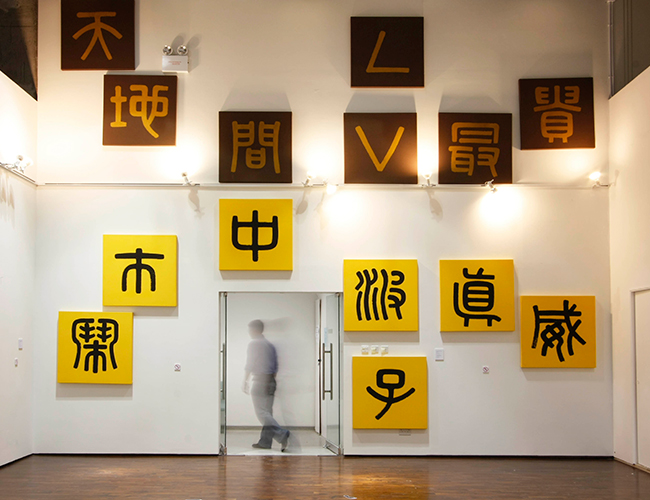 Give and Receive
This part focuses on how like-minded people maintain friendship by giving and receiving seals. At the same time, by embracing reciprocal cognizance on the thoughts expressed by the literary contents of their seals, the givers and recipients establish shared values and an in-group identity quite unknowingly (Fig. 7, 8 & 9). 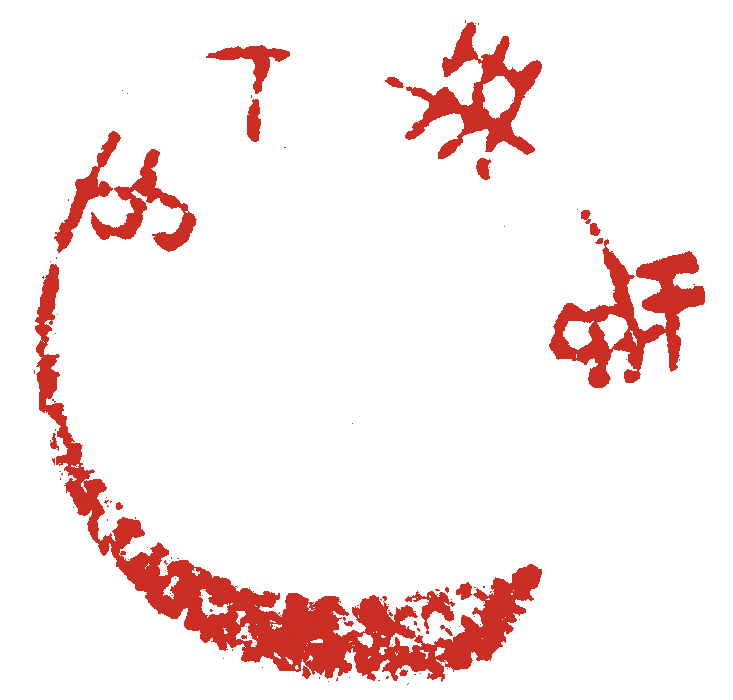 Black and White
This section explores the concept of "void-solid reciprocity" in Chinese art. Experimental calligraphy Emptiness (Fig. 10) is the best example to demonstrate this concept. The Chinese character "kong" (空) or "emptiness" is written in seal script in a hollow-out way with flowing and dripping ink on a piece of thin and transparent chiffon. What's more, the brushstrokes and the consciousness of space also extend out of the work in a manner of subverting the tradition — "Emptiness" integrates with the view outside the glass wall of the gallery, generating a compellingly synergistic effect. 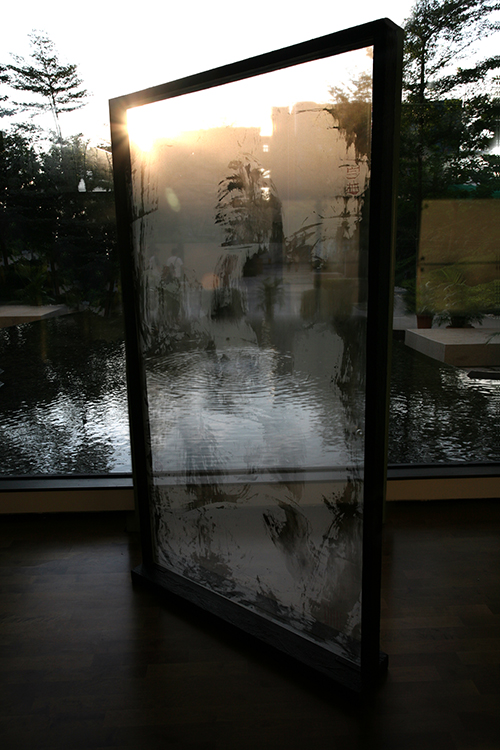 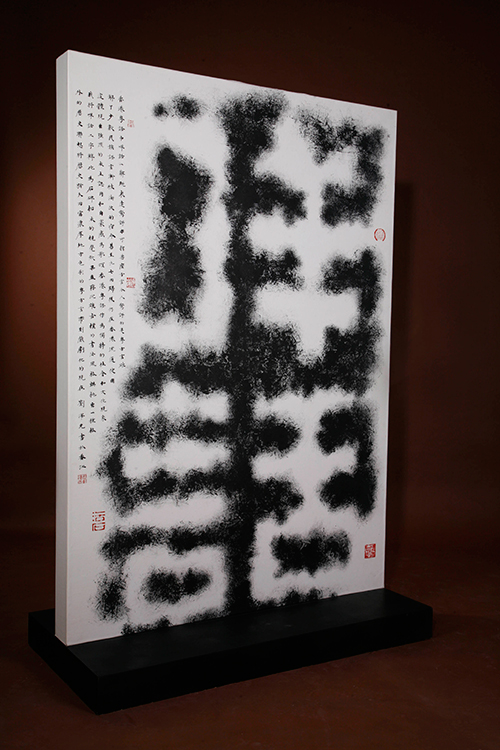 
Elegance and Vulgarity
This pair of concepts could be highly integrated with each other in calligraphy in a forward-looking way of thinking and creative practice. For example, What? (Fig. 11) is a three-dimensional work inspired from the informal Cantonese dialect. The vulgar Cantonese expression "咩話" has a twofold meaning: an exclamation of surprise or a question asking literally "what dialect?" Cantonese is a dialect that has "surprisingly" defied the fate of extinction of most minority languages and continues to remain in dominant use in Hong Kong even after the 1997 handover; it helps foster a strong sense of local identity and pride. To celebrate Cantonese as a distinctive social and cultural phenomenon, the two Chinese characters "咩話" has been transformed into a visual effect resembling a stone monument rubbing, and evoke an additional sense of historic association through a forcefully archaic and austere calligraphic style, thus taking the age-old and richly vernacular Cantonese dialect through the caverns of time into the dramatic present. In this light, this work encourages the audience to think about the local identity constructed by Cantonese dialect and culture in the modern society.

1 This article is adapted from the author's previous essay entitled "Harmony: Synergy between Art Historical Research and Creative Works."