Be/coming: A Glass Path to Happiness 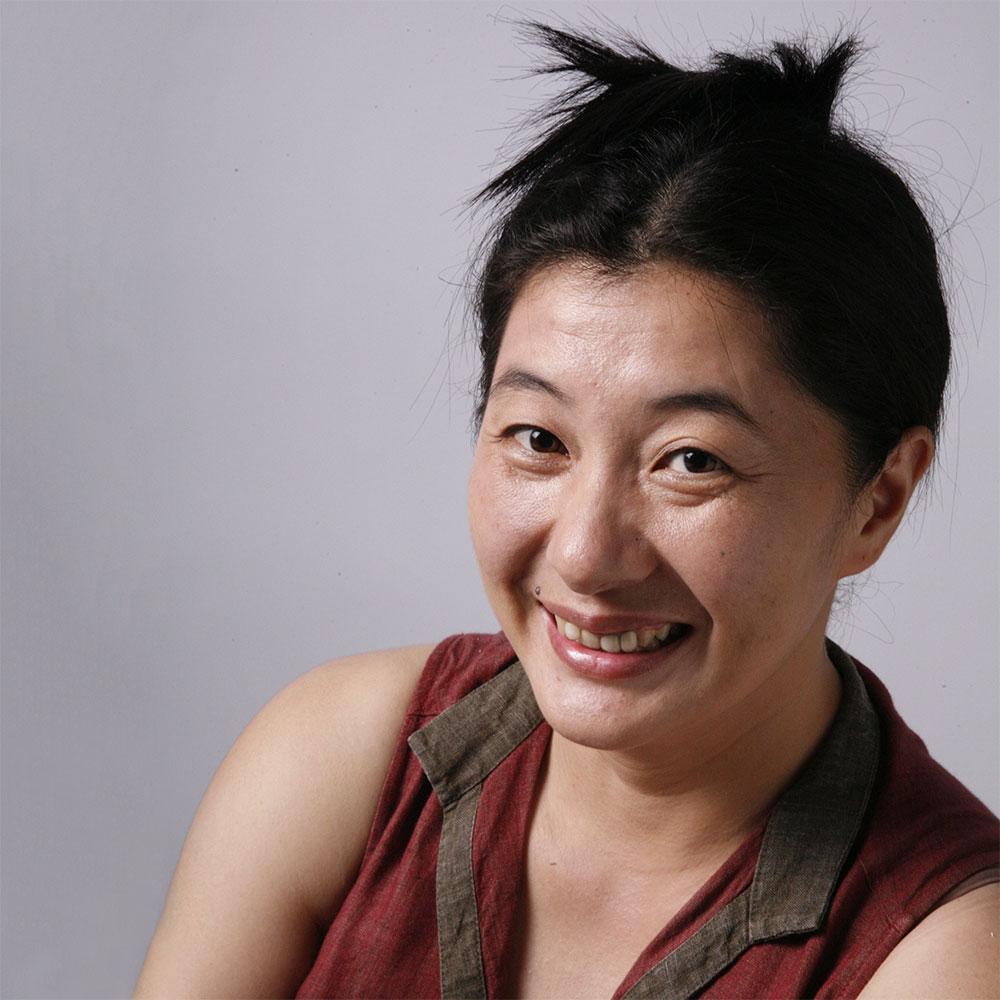 Glass is the container of thoughts, meanings and metaphors associated with its materiality: fragility, fluidity, daily function, transparency and translucency, with properties of preservation and separation. It exists in between liquid and solid, it touches everything with celebration!

When a thought comes to break the earth
You have to watch it
Just a moment
—Sunny Wang, The Journal of Be/coming: Poetic Diary 2008.11.1

The central research of my work explores of the concept of Be/coming in the practice of glass art underpinned by the aesthetics and spirituality of Chinese calligraphy (ink-brush and words).

The theory of Be/coming used for this project is framed by Buddhist practice as an investigation of life (and making) through spirituality and everyday phenomena, thereby transforming intellectual theory through life experience. The understanding generated through actual life experience becomes the insight to well-being/happiness, and is passed on by creative practice.

The research “Be/coming” creatively explores the simultaneous process of being (existence) and becoming (continuity of being). The solidus (/) is used between “be and coming” and refers to the Buddhist concept of non-duality, the unity of oneness and not-twoness, not-one not-two and also-one and also-two. The (/) also implies the void or empty space where things originate, interact and connect, where being and becoming (Be/coming) happens in between beings and things.

The word Be/coming evolves from a static idea to a moving idea. The process of life is never-ending; it changes into different forms and continues. Our life is always in a state of ongoingness (suchness), in the flow of Be/coming. The concept of Be/coming is realized and manifested through art works made for research as well as the artist’s life experience during the making.

Below is an introduction of four works based on this research.

Self
The hot-formed "Self 自" series was formed in October 2006; it expresses the Chinese character "self 自" as a way to understand my-Chinese-self. The air bubbles visible inside the work were intended to indicate both the space between the lines and the breath—the energy/qi 氣 needed for writing and making. The bubble literally creates an inner space, a space for the reflection of self (maker/artist) and the other-self who is looking at the work. 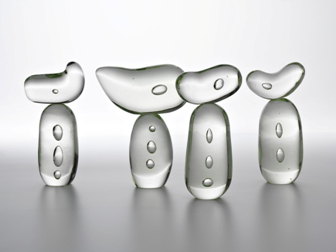 Suchness-Ease and The Poetic Stones
These two installation works are based on the concept of maintaining ease in a dynamic changing world; stillness and motion appearing together. Suchness is thing(s)-as-it-is; Ease in Chinese is Rong-Yi 容易; Rong容 means to contain/allow/endure, Yi易 means change, to allow change and therefore ease (容易). To allow change is the acceptance of the way of life with ease, therefore suchness-ease (2009-2011). 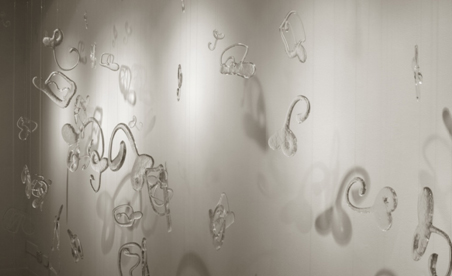 The work "The Poetic Stones" (2010-2011) is based on the poems in The Ten Oxherding Pictures (Kuo-an Shih-yuan郭庵師遠). It is analogous to the rhythms/tones from the structure of the poems. I analysed the rhythms/tones of the poems by using a calligraphic line "–" for the level/flat tone (平聲) and a circle "○" for the oblique tone (仄聲), and simplified them into calligraphic lines and circles to compose the meaning abstractly. The pattern of the 28 stones on the floor repeats the pattern of the poems, four lines, each line of seven words. 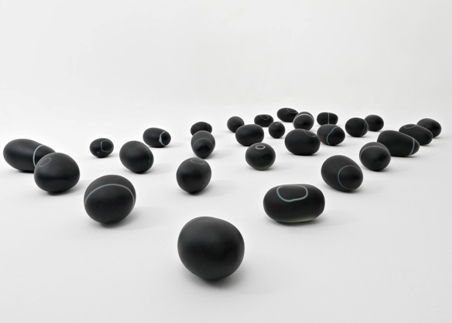 The Glass Circles
This work is the last one I developed for my PhD research as the conclusion/full-stop and returning to the origin of life. Ending is a “full-stop” (a dot in English, a little circle in Chinese text). A little circle “○” is also the symbol of zero, and when we say someone’s life is returned to the zero point, it could mean in Chinese either that someone is starting a new life or ending an old life, or both. Each glass circle was drawn within one breath. More than one hundred circles were placed on the floor to create a meditative time-space for people to be and become. 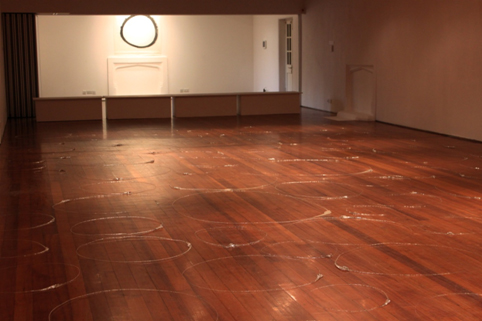 The way of Be/coming is open-ended and still in process. As the late Zen Master, Sheng-yen said, "The process of practice itself is really the final result."1 To gain well-being/happiness, to take care of ourselves (myself) within the experience of action/happening, to be still and flexible in the ever-changing world, even in a stormy moment, is a continuing practice; as life goes, the journey of pracice never ends.

This acceptance requires one to work/live fully and freely in each moment, and to express oneself fully with enjoyment and a calm mind, here and now, so as, the best one can, to maintain well-being/happiness in the continuous flow and flux of life/making, is Be/coming!

Things of the past are already long gone
Things to be, distant beyond imagining.
The Tao is just this moment, here and now, these words:
plum blossoms fallen; gardenia just opening.
—Mountain Dwelling 山居, Qing Gong 清珙 2

1 Shengyan and Stevenson, Hoofprint of the Ox, 211.

2 The English translation is from A Drifting Boat: An Anthology of Chinese Zen Poetry, ed. Jerome P. Seaton & Dennis Maloney
(Fredonia: White Pine Press, 1994), 150. I added “here and now” in the third sentence.